From time to time, questions and inquiries arise about whether or not any radiation lingers in the area of the former Water Pollution Control Plant site where some radioactive material was stockpiled for several months in the early 1950s. Because of the present-day Hunziker Youth Sports Complex's proximity to the old site, visitors to the sports complex continue to be understandably interested in the facts of this period in history. 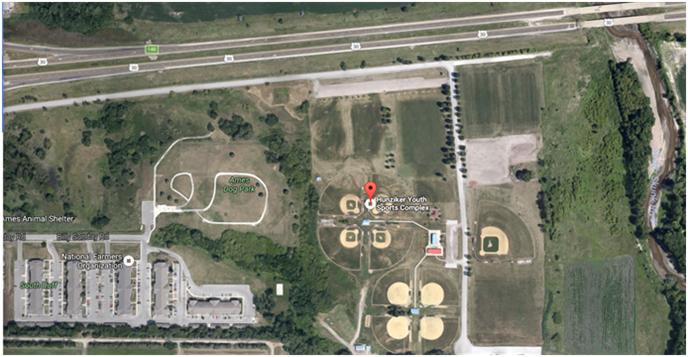 The former Water Pollution Control Plant was constructed in 1950 and continued in service until November 1989. The plant was located south of U.S. Hwy. 30 and east of U.S. Hwy. 69 at the site of the current dog park. The Hunziker Youth Sports Complex is in proximity to the decommissioned plant site.

Accidental discharges in 1951-52 from the Ames Laboratory contained mesothorium, a product of the decay of radioactive thorium. These low-level radiation constituents attached to the wastewater solids which were removed in the treatment process. These solids were contained for six to eight months within an earthen berm at the Water Pollution Control Plant site until removed and land-applied on cropland at the Ames Airport.

The stockpile area at the plant site and the airport cropland have been monitored several times since the discharge. In the early 1980s, only the stockpile area showed only slightly higher than background level, though this radiation level represented no health hazard to anyone. Still, the Ames Laboratory continued to monitor. In 1988, soil from the stockpile area was voluntarily removed and transported out of state to an approved low-level radiation waste disposal facility to eliminate any residual low-level radiation at this site. No radioactive materials remain at the site.

Because no data was collected on surrounding land, in 1994 the Iowa Department of Public Health requested a radiological survey be conducted on the adjacent area which includes the present-day sports complex . The Environmental Survey and Site Assessment Program of the Oak Ridge Institute for Science and Education performed the survey. The subsequent report provided data to the Iowa Department of Public Health and the Bureau of Radiological Health in the U.S. Department of Energy for their evaluation of the radiological status of the land areas.

The nature of the survey (study) included surface scans, below-ground excavation, and soil sampling. Additionally, water samples were collected from the below-ground (water table) drainage way and the Skunk River. The scans did not show any areas of elevated radiation outside the fenced treatment plant site. Low-level radiation was detected primarily in the top soil within the fenced area where the sludge was originally stockpiled.

A final report by RUST Environment and Infrastructure in June 1994 concluded that “no significant residual radioactive material is likely present at the site” and further notes that “the site is judged to be acceptable for use without restrictions” based on current Nuclear Regulatory Commission and U.S. Department of Energy standards.