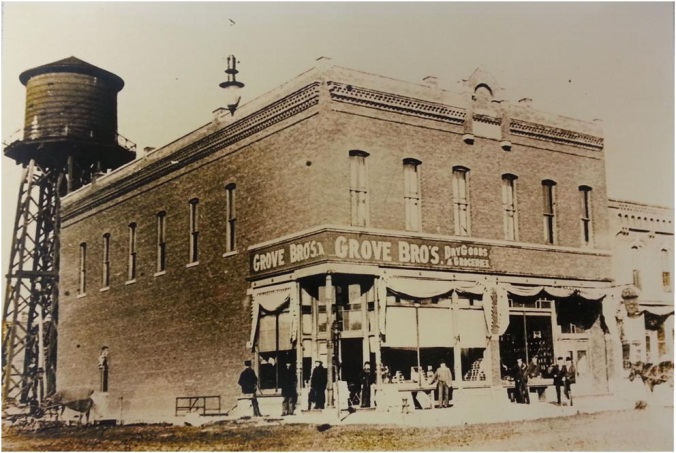 EARLY WATER HISTORY -- S.O. OSBORN DRUG STORE ON MAIN AND DOUGLAS
S.O. Osborn Drug Store was located at the northeast corner of what we now know as Main Street and Douglas Avenue. When he wanted water for household use, Mr. Osborn would drop a bucket through a trap door in the floor and bring it up full of cold water.


1874 -- BOUSQUET'S DRUG STORE ON MAIN AND KELLOGG
In 1874, the public drinking water was secured at the old town pump posted in front of Bousquet's Drug Store (located at the northeast corner of Main Street and Kellogg Avenue). A second well was added the same year located at the northeast corner of Kellogg Avenue and Onondaga Street (now known as Main Street).


1897 -- DROUGHT
According to the 1897 town hall minutes, "There was a drought and the citizens were forbidden to water teams [of horses] at the town wells [each located at Douglas and Duff]. Any wells dug were to be under supervision of a City committee appointed to locate new wells."


1886 - 1887 -- FIRES
As a result of many towns lacking water utilities, many fires raged unfettered, such as happened in Ames during 1886 and 1887. One memorable fire started on Main Street and spread to nearby buildings in 1886. In 1887, a second fire in the business district destroyed practically the entire area. It was at this time that City officials begged the railroad to be able to connect a single hose to the railroad's water tank which stood at the Douglas Avenue crossing.


This marked the first attempt at furnishing public service to the little pioneer village. After several successive petitions, the railroad agreed and a single pipe was laid above ground on Onondaga Street (Main). The residents were required to pay a nominal fee and pledged to use the water only in case of fire. This was, of course, no serious obligation because each householder had their own well for drinking and household purposes.


1888 -- REBUILDING AFTER THE SMOKE CLEARS
In 1888, the town started to rebuild after the fires and townspeople started talking about a central water works and some means of fire protection. The citizens of Ames petitioned the City Council for a municipal water system. A new City Council committee called Public Grounds and Buildings canvassed other towns of similar size to Ames to discover how fire management was being treated elsewhere.


1891 -- AMES' SMART CHOICE
The water works system of the City of Ames was established in 1891 and consisted of a small wooden elevated tank, a well, and a pump house located at 5th Street and Kellogg Avenue. A water main and hydrants were placed along Main Street. These were paid for by abutting property owners and later purchased by the City. There was no purification process in place for the water. A man was hired to pump the water into the tank which was paid for by the downtown merchants.


City Council notes from 1891 reported that a barrel of water from the Main Street water works was five cents per barrel for it to be carried away (If we assume a barrel contained about 55 gallons, the same amount of water at the present-day rate of 74 cents/100 cubic feet would also be approximately the same cost). If people took an entire tank full of water, the cost was then 25 cents. 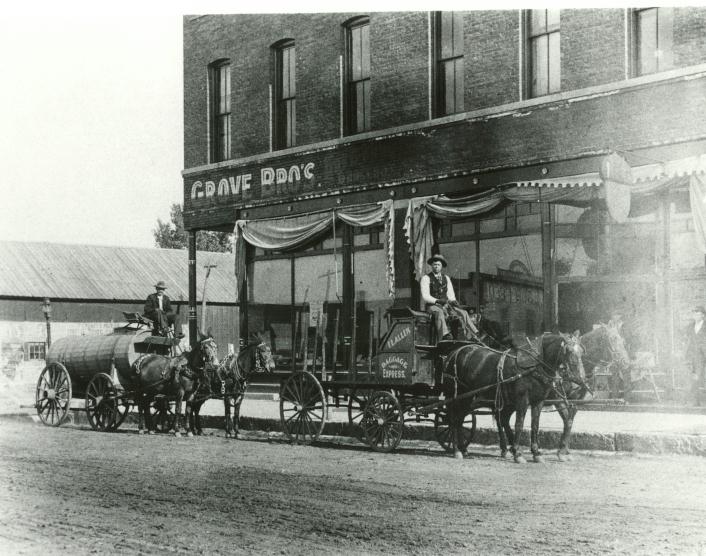 Frank Allen (pictured above) was paid $8 each month to sprinkle the streets with water to control dust; while P.C. Compton was hired to operate the water works pump for 18 cents an hour and to look after the horse troughs.

• Public bathtubs--$10 annually
• Private bathtubs--$3
• Blacksmith shops--$3/first fire and $2 for each additional fire
• Dwellings--$6/faucet
One stringent rule stated that water could not be furnished "to other families" by residents, and it warned that the City Council would inspect "anytime" for rule-breaking. 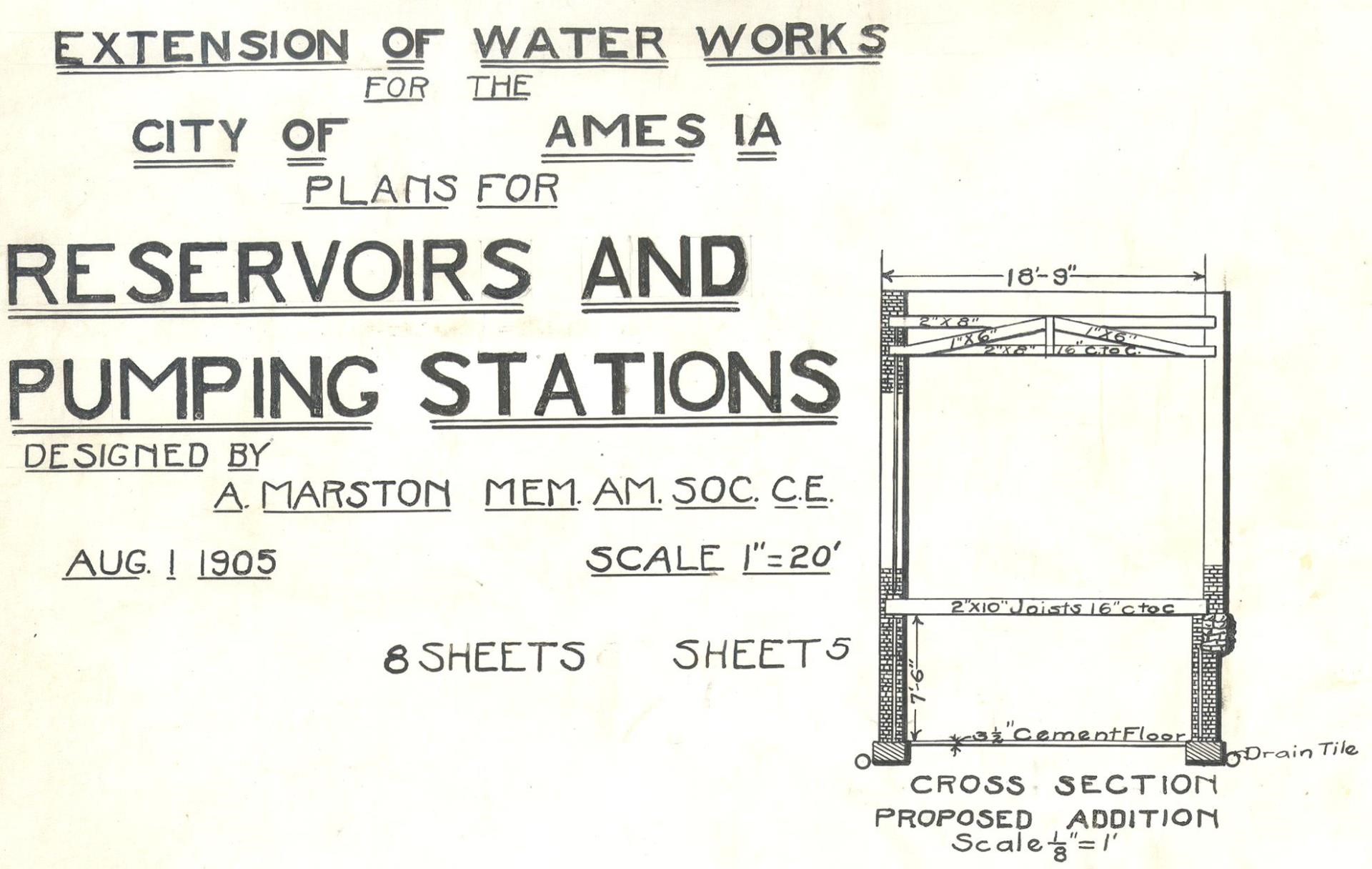 1905 - THE START OF EXPANSION
In 1905, the City Council ordered bids for an extension of the water works.  Mr. Wickham was employed in 1906 at the rate of $100 per month for inspection of the water and sewer extensions.

The first step in expansion was to move to the present site of the water works at East 5th Street and Crawford, dig wells, erect a pump house, a 50,000-gallon elevated tank, and an underground concrete reservoir (1906).  The pumping station reservoir and elevated tank were designed by Anson Marston, then Dean of the College of Engineering at Iowa State College (Iowa State University).


1909 - PUBLIC DRINKING FOUNTAIN
In 1909, a public drinking fountain (which consisted of a basin with bubbling cups on a column) was planned for the corner of Main Street and Kellogg Avenue.  It had an electric light globe on the top with a dog trough below.  A drinking fountain for horses was also installed at Kellogg Avenue and Story Street.  Mr. Roberts, who owned a pony farm, asked that steps be added so his ponies could also drink.  In 1916, the horse water trough was moved from 5th Street and Kellogg Avenue to Des Moines and East 3rd Streets. 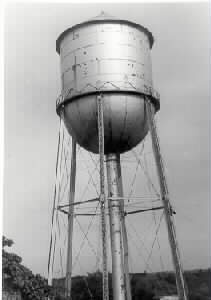 1924 to 1940 - EXPANSION CONTINUES
Until 1924, the residents of the Fourth Ward were supplied water purchased from Iowa State College.  During that year, the City erected a 200,000-gallon elevated tank on Hunt Street and a booster station on Lincoln Way at Squaw Creek, tying all water mains in the City together.  A 1,100,000 gallon concrete reservoir was constructed at the plant site at the same time.  At that time, treatment consisted of iron removal only.  The water was aerated, settled, and delivered to the mains by high lift pumps.

In 1927, a filtration plant was added.  The nominal design capacity was stated to be 2.0 m.g.d. and included four rapid sand filters for iron removal.  In 1931, a softening plant was constructed allowing everyone to have soft water.  The softening plant consisted of overhead lime storage, lime feeders, mixing basins, and settling basins.  In addition, two filters were added and design capacity increased to 3.0 m.g.d.  The increased usage required a larger elevated tank downtown, and a 300,000-gallon tank replaced the smaller one in 1936.  The physical appearance of the plant was improved in 1940 when a front entrance and office were added.


1954 to 1962 - PEAK USAGE
In 1954, a two-million-gallon ground storage reservoir was added.  In 1955, the plant rated at about 3.3 m.g.d. rate for several days during a very severe hot and dry spell.  This was absolute peak capacity at that time and fortunately was not approached again until the summer of 1963.  In fact, several years later, 3.0 m.g.d. was stated to be the maximum "normal" capacity.

In 1958, an elevated tower was constructed at 24th and Hoover Streets.  During 1962, the treatment plant capacity doubled, and a new high service pumping station was built one block east of the plant.  Other important additions in the 1962 construction program included a new clarifier, two new walls, distribution mains, and a one-million-gallon elevated tower on North Dakota Avenue.


1970 to 1990 - REMODEL AND HIGHER CAPACITY
In 1970-71, the plant was expanded from 6 m.g.d. to 9 m.g.d. by plant modifications and construction of four new filters.  In 1978, a five-million-gallon pre-stressed concrete reservoir was constructed at the plant site for additional storage.  In 1987, a new front was added to the water plant which includes administrative offices, a conference room, and additional laboratory space.  In 1988, the plant capacity was further expanded to 12 m.g.d. by plant modifications and construction of a new settling basin.  In 1990, a new elevated tower was construction on Bloomington Road.


2008 TO PRESENT - A NEW CHAPTER BEGINS
In 2008, the City of Ames Water & Pollution Control Department conducted a study to determine the future water needs and demands of the community and the results of the study showed that the water plant located at 300 E. 5th Street would not be able to sustain that demand.

In 2016, the book History of the Ames Water Department was published.  This book was a labor of love by retired Water and Pollution Control Director Harris Seidel.  Harris had the great honor of opening the first box when the shipment arrived! 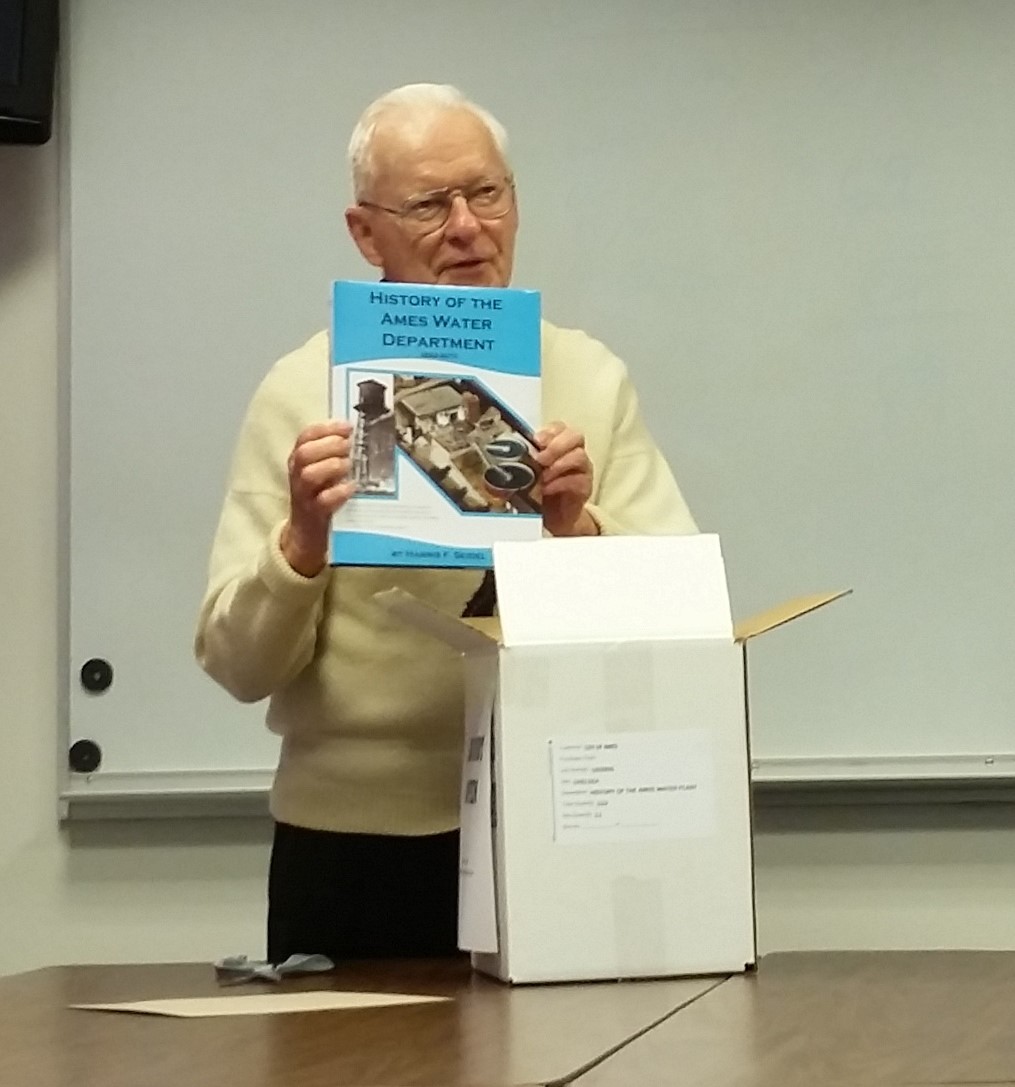 On August 26, 2017, the Water Treatment Plant held a ribbon-cutting and open house for the public.  Over 1,300 visitors came through the doors to see the new plant in operation. 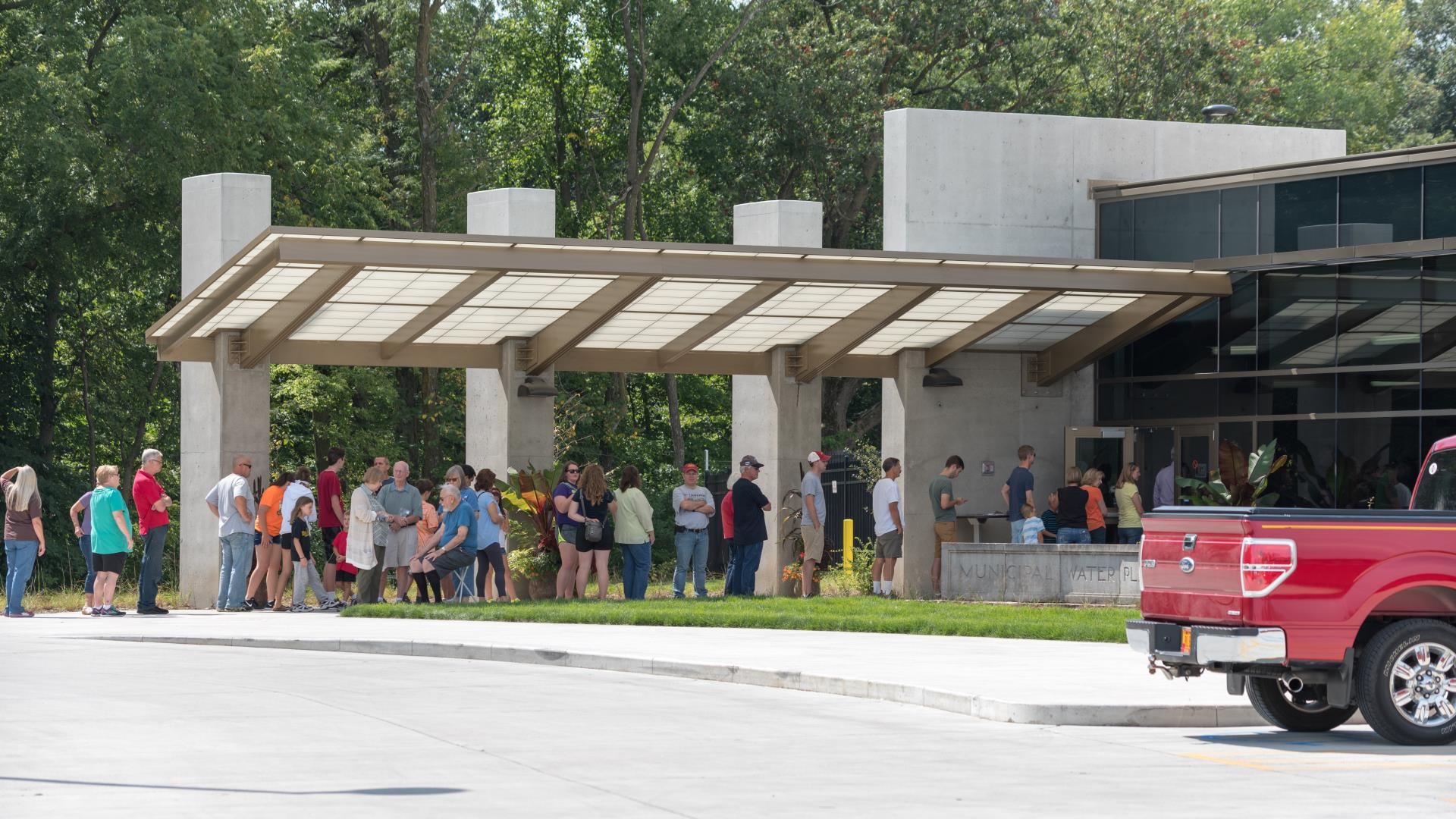